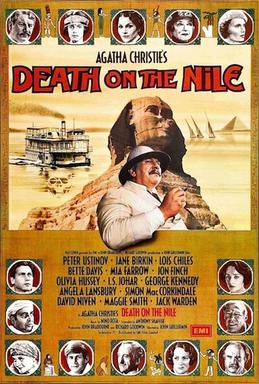 Whodunnits aka Cozy Mysteries. Whatever you call ’em, I’m obsessed! And lately I’ve been particularly obsessed with cozies set in the 1920s and 1930s. Specifically ones set in England (although I’ll happily read other settings, too). This may or may not have something to do with an upcoming project. 😉

One of my all time favorites is Agatha Christie’s Death on the Nile. I’ve read it multiple times (and watched the movie with Peter Ustinov as Hercule Poirot). It was published (and set) in 1937 aboard a Nile cruise in Egypt and has such a wonderful blend of cozy charm and exotic mystery. Makes me want to brave the heat and take a trip down the Nile myself (or is it up the Nile?).

I recently discovered the wonderful Daisy Dalrymple mysteries by Carola Dunn. Starting off with  Death at Wentwater Court, these are quick, fun reads (Which I’m realizing I much prefer). Set in England in about 1923, the story revolves around a young, upper class woman who craves independence. And so, she sets out to make her living (shocking!) as a writer. Which, naturally, leads to finding dead bodies and meeting sinfully sexy police detectives. As you do.

And, of course, I love that the author is (sort of) a fellow Oregonian. According to her bio, she’s originally from England, but now lives in the southern part of my home state. Which is so cool, as I lived in England for six years.

And that brings me to the second book in the Discreet Retrieval Agency series, Teetotaled by Maia Chance. I’m crazy in love with this series. I simply can’t get enough! Lola and her sidekick, Berta, have become unwitting teetotalers thanks to being extremely broke. Which leads them to an investigation on a health farm. Which leads to a dead body. Which leads to…well, you get the picture. Set in the jazz era of 1920s New York, this second installation is every bit as hilarious and charming as the first.

And that’s what I’ve been reading. How about you? Have you discovered any fun new reads lately?

2 thoughts on “What To Read Next: WhoDunnits”